Cats In History: The Victorian Era 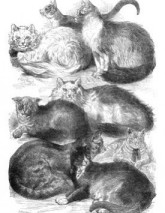 The prize winners from the first cat show in 1871.
Image courtesy of www.harrisonweir.com

Chances are, if you are reading this, you like cats.  You may even have a cat or two (or three, or four, or…) living with you.  When you think of domestic cats you probably imagine small, furry creatures who are supposed to live in people’s houses and be treated as a member of the family. You might even think that the idea of a cat living outdoors, on the streets is sad or somehow wrong.

People haven’t always thought that way about cats. From the Middle Ages until the Victorian Era, cats were viewed as “useful animals”, but not widely viewed as pets. Humans kept cats around to control rodent populations and that is pretty much it. Cats were expected to live outside and wander the streets, fending for themselves. During these times, people had little regard for animals in general, treating them more like things than living, breathing, valuable creatures. 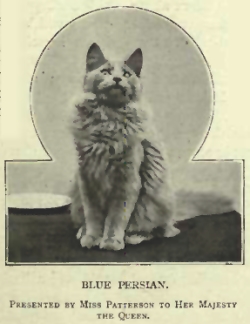 One of Queen Victoria’s cats.
Image courtesy of www.Eurofancy.de

The Victorian Era changed everything for cats. Queen Victoria had been very isolated during her childhood due to the schemes of her mother. Animals and dolls were the only companions that she had. Perhaps this is why Queen Victoria would become an avid animal lover and advocate for animal rights. She concerned with the treatment of domestic animals.  Queen Victoria funded school prizes for essays written about kindness to animals. She spoke out publicly against the practice of vivisection (doing experiments on live animals) calling it “a disgrace to a civilized country.”  In 1840, she gave her official patronage to the Royal Society for the Prevention of Cruelty to Animals (thus it is “royal”).  However, she did show a bit of hypocrisy with her love of hunting sports.

Queen Victoria owned many pets (she especially loved her dogs). Most notably, she owned 2 blue Persian cats that she was fascinated with. Some say this was because of a work put out by Charles Darwin regarding his observations of the different types of cats he had seen. He had noted that most of the cats he observed looked very similar (other than different coloring) with the exception of Persians and Manx.

The British people followed the Queen’s lead and fell in love with cats. Discovering different breeds of cat soon became of great public interest. Having pet cats that were lavished with affection caught on like wildfire. Some people began to personify cats so much that they would clothe them to keep them from being immodest.

Showing It All Off 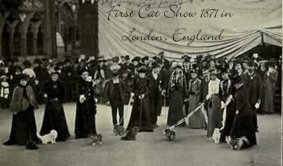 The 1st Cat Show in 1871.
Image courtesy of www.Squidoo.com

Artist, illustrator, and animal lover, Harrison Weir, organized the first ever cat show in 1871. This was an affair for the upper class and aristocrats to show off their beloved cats and compete for a prize. The allowed breeds included: Black, White, Tabby, and Longhairs. The public couldn’t wait to see all the different types of cats. The show would have 170 entrants and more than 20,000 visitors! A second show was created to include the cats of the “working class.” “Cat Fancys” as the shows were known quickly spread around the globe.  The first Cat Fancy in the U.S. was at Madison Square Garden in 1895.

Harrison Weir had been considered very knowledgeable about breeding animals. In 1892 he published a book called Our Cats and All About Them. The book talks about the different breeds he has identified, caring for cats, cat shows, and some humor. The entire book can be read online for free and there is also a free audio book version. To view them click Our Cats book online or Our Cats audio book.

There were a number of famous cat lovers throughout the Victorian Era that helped our view of cats to become what it is today.  Here are just a few of them:

This error message is only visible to WordPress admins