“Those with feelings wondrous kind, Can love with felines ever bind.”- Louis Wain

Louis Wain and Pete in 1890.
This photo is in the Public Domain

Louis Wain was born on August 5, 1860 in Clerkenwell in London, England. He would be the only brother to 5 younger sisters who would live at home and never marry.  Born with a cleft lip, doctors told Wain’s parents that he would not be able to go to school or be taught until he was 10 years old. Even after trouble with truancy in school, Wain found his way into the West London School of Art where he studied art and eventually became a teacher there.

At the age of 20, Wain had to take over as man of the house when his father passed away. He soon gave up teaching to become a freelance artist. The career change proved to be a very successful one.  He made a good money on his drawings of animals and country landscapes. Always an animal lover, it was his hope to make a living painting portraits of dogs.

Quite a scandal at the time, Wain married his sister’s private tutor, Emily Richardson, when he was 23 years old. She was 10 years older than him. Not long after the marriage, Emily fell ill with breast cancer.  To make her smile, Wain began drawing the stray cat (Peter) that the couple kept as a pet. It was unusual during this period of time for people to keep cats as house pet. Cats were still seen more like a farm animal – a necessity to keep rodent populations under control. Emily loved the cat drawings and made him promise to continue drawing the cats. She would die only 3 years into their marriage.

“He has made the cat his own. He invented a cat style, a cat society, a whole cat world. English cats that do not look and live like Louis Wain cats are ashamed of themselves.” – H.G. Wells 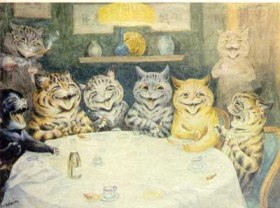 Cats drawn by Wain showing his anthropomorphic style.
This image in in the Public Domain.

Little did Emily know that her promise would inspire the art that would be her husband’s legacy.  Louis Wain kept his promise to continue drawing cats.  Wain became known all over Victorian London for his cats. At first they were very realistic portraits of cats, but slowly a new personality emerged. In 1886, Wain drew A Kittens’ Christmas Party for the Illustrated London News, in which he portrayed his first anthropomorphic (having human characteristics)  cats.

Over time Wain’s cats became more and more human-like. He said that he would go find people doing things around town (like sitting at a restaurant) and draw them as cats. Wain’s art showed cats standing up-right, wearing clothing, drinking tea, smoking, playing musical instruments, play cards,  and more. He was very prolific; he illustrated more that 100 children’s books and his drawings appeared in many other types of publications.

Louis Wain did not just draw cats, he truly loved them.  He had this to say about Peter, the cat that had first inspired him:

“To him, properly, belongs the foundation of my career, the developments of my initial efforts, and the establishing of my work.”

Wain was involved with several different animal charities around London and had twice been the chairman of the National Cat Club (1989 and 1911).

“Not a drain of milk left for these poor kittens’ tea, For the cook was so greedy, and drank it you see.” – Louis Wain, Kitten Book

A cat drawn by Louis Wain during his stay in the mental hospital.
This image in in the Public Domain.

Unfortunately, Wain was not a very good businessman. A lot of people took advantage of his money and duped him into bad investments and get rich quick schemes. He didn’t seem to know how to properly barter with companies for royalties on his work.  Even after a cartooning job in New York City, Wain found himself back and home living with his sisters and without much money to show for his work.

Mental illness took its toll on Wain later in life. Eventually his fits and outbursts became too much for his sisters to manage so they had him placed in the poverty ward at Springfield Mental Hospital in 1923. The conditions were so bad there that Wain’s predicament became the talk of the town.  H.G. Wells, a fan of Wain (and author of the famous  science fiction novels War of the Worlds, The Time Machine, and The Island of Dr. Moreau) and Prime Minister Ramsey MacDonald personally paid to have him relocated.  Wain spent his last 15 years at  Bethem Royal Hospital where there was a garden and a group of cats for him to enjoy.  He continued to draw until his death.

“I consider that my boyish fancy did much towards my future artistic life, for it taught me to use my powers of observation, and to concentrate my mind on the details of nature which I should otherwise never have noticed.” – Louis Wain 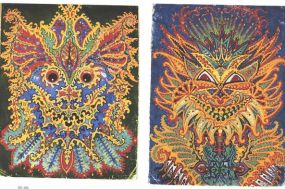 Cats drawn later in life by Louis Wain.
This image in in the Public Domain.

There is a lot of controversy over Louis Wain’s mental illness. He is  most popularly described as having had schizophrenia. The theory (which is still being researched) is that his schizophrenia was caused by Toxoplasmosis, a parasite infection that humans catch from cats. A psychiatrist lined up a series of Wain’s drawings to show how they were affected as the schizophrenia developed. It appears that  Wain’s cats went from whimsical figures to kaleidoscopic monsters.  Others claim that schizophrenia can not be proven by this series of drawings because we do not know which order they were painted in.

Dr. Michael Fitzgerald believes that Wain may have been suffering from Asperger’s Syndrome. Sometimes people with an Autism disorder will have what is known as visual angonsia. This means that the visual processing part of their brain is not functioning properly and so they have difficulty recognizing objects even though their vision is fine. These people describe objects as blurs of color, lines, and details that have no meaning. Wain’s later drawings could be his way of trying to make sense of the shapes and colors he was seeing without being able to identify the objects visually. Fitzgerald notes that Wain’s artistic technique never degraded as one would see in a patient suffering from schizophrenia.

"I will love you, and pet you, and call you George

#ad Enjoy cat-themed apparel? You will love the cu

"Scratching is an art. I made a happy little cloud

"Clean paws are a work of art. Don't you think so,

"Don't start playing with the feather without me!

"Bring that feather back over here, human! I never

"Don't worry about getting photos of Manna. I laid